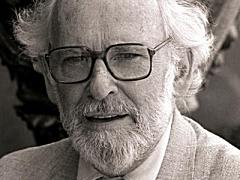 Actor Barnard Hughes died Tuesday in New York at 90. My grandfather was his stand-in on the Buffalo set of the film Best Friends in 1982. Hughes and Jessica Tandy played the parents of Goldie Hawn, who was bringing her new beau (Burt Reynolds) back to Buffalo to meet them. The movie is fair, but certainly worth a look for any Buffalonian. (It is my grandfather's arm that hangs out of a car window in one shot when Hughes' character dri 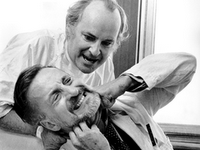 ves away -- the fleeting fame of a stand-in!)

Here are my grandfather's recollections of his time on the set:

Barnard was a very quiet man. When I was introduced to him as his stand-in, he shook my hand and said, "I'm happy to see that they have selected a young fellow for this Buffalo segment." Later in our conversation I gleaned that I was three years older than him.

Barnard was a quiet man, and spent most of his off-camera time in his trailer, reading The Wall Street Journal or other periodicals from the New York City area. Barnard usually ate in his trailer, while Jessica Tandy and Hume Cronyn (when he was in town) would eat with the "day gang," or second team, as we stand-ins were called.

We spent four weeks together while the Best Friends segment was being done in Buffalo. Barnard always had his lines and procedure ready when the director (Norman Jewison) called for the first team. We, the second team, would retire and watch the "professionals" (the first team) do several takes for the evening -- dailies to approve or advise, and retakes. The four principles were real professionals. It was an experience to spend four weeks with Barnard -- to see the care that he took with the preparation for his part and the way that he and Jewison worked together.

Three or four years later, when Patricia and I were in Arcadia, Calif., we went to see "The Iceman Cometh," which starred Barnard. I called him the next day to say that we enjoyed the play. When I said my name, he said, "Buffalo, New York. I will stop over when we close here, next week, and see my friend, Bradley Fiske." Bradley was the merchandise manager at Flint & Kent, a quality department store on Main Street in downtown Buffalo.

Barnard was a real professional -- stage, screen and radio. In the four weeks that I was his stand-in, he was always ready with lines, procedure and availability. He complimented me regarding my "patience," but I learned what professionalism in the workplace really meant from him.

I am saddened to hear that Barnard has died, but he did have a grand career in all the facets of life!

Link buffet: obits from The New York Times, Playbill and an appreciation by critic Jami Bernard. [Photos: Second one is from 1971's The Hospital, in which Hughes played a mad patient -- here seen strangling George C. Scott. Third photo is from 1978, when he won a best actor Tony for "Da," alongside Liza Minnelli, his future co-star Jessica Tandy and John Cullum.]

might I point to barnard hughes's perf as the grandfather in The Lost Boys, a 1987 vampire flick starring the Coreys (feldman and haim).

Don't forget Kiefer. Young Kiefer plays one of the vampires. Incidentally, it was Lost Boys which introduced Kiefer to Jason Patric, who would then steal Julia Roberts from him, like, five years later. Or something.

that is a great story.