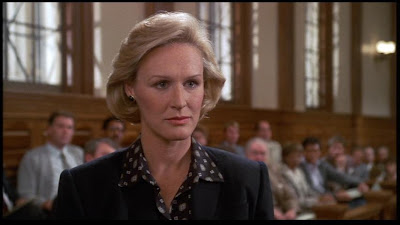 As long as we've been talking about Glenn Close and Jeff Bridges: I'm having a hard time with Jagged Edge. It's a 1985 thriller starring Bridges as a newspaper editor accused of muder and Close as the attorney who defends him. Naturally, romance develops during the trial. The plot -- by B-list writing god Joe "Basic Instinct" Eszterhas -- choo-choos along as an effective whodunnit right up until the last shot. But the Close character, Teddy Barnes, gave me a lot of trouble. Is she an incredibly complex, strong character, or is she a weak pushover who just needs a man? Eszterhas and Close shows us both sides, and it's hard to reconcile one with the other. Oh, Teddy Barnes. Sweet-voiced, then steel-tongued. Indignant, then weepy.

That's humanity, right? We swing from one extreme to another, and Teddy Barnes is no different. A week after meeting an alleged matricidal maniac, she shacks up with him and gets all lovey-dovey. She's also a hard-working single mom who frosts over when a witness calls her a bitch. In the end, though, she's revealed as something different, something...more. Or less? The final scene shows us neither the soft lover nor the tough cookie. Close greets the film's climax as a woman numbed in the wake of a quiet nervous breakdown -- one that occurs offscreen, or at least inside her. She wins the day, plot-wise, but her faith in the legal system (and in herself) is shattered. See the video below (spoilers included).

I've never seen anything like the final scene of Jagged Edge. It has all the elements of a standard thriller climax, but the Teddy Barnes character is definitely not the standard heroine. She's something weaker. Or stronger? She has a gun in her hand, but it's not a show of defiance or revenge. It appears to be some sort of psychosis -- some villainy -- that we can't understand; Eszterhas hasn't given us enough to work with. But we do see, in Teddy Barnes's eye, a glimmer of Alex Forrest, whom Close would give us two years later in Fatal Attraction. Can someone please write a thesis on these two wildly confounding female characters, both of whom have male names?

Glenn Close was riding the peak of her celebrity with these two roles. Two thrillers in the mid-'80s, when she was racking up Oscar nomination after Oscar nomination. I would kill to sit her down now, watch these two movies with her and ask her where the hell she found these two fascinating, unsettling, confounding characters.
Posted by J.J. at 10:00

I'd love to sit down with George Lucas and ask him what he was thinking when he approved a $2,000,000 duck suit.

I know that has nothing to do with either of the films your wrote about but it's just been bugging me lately.

Also, would you participate in He Shot Cyrus's "My Best Post" blog-a-thon?

Full details are at: http://he-shot-cyrus.blogspot.com/2008/09/big-announcement-best-post-blog-thon.html

Other than the anti-smoking medicine chantix, the quit smoking drug Zyban and a whole array of nicotine replacement therapies, namely, nicotine gum, patches, lozenges et al are also available in the market that help you to trigger off smoking cessation. But, significant Chantix facts present at the website http://www.chantixmagic.com make it apparent that in spite of the presence of all these anti-smoking therapies, Chantix still remains the most highly sought after quit smoking drug on account of the Chantix superb mechanism that helps you to get rid of nicotine addiction at ease.

you to buy chantix to quit the very dangerous 'nicotine' addiction by having the anti-smoking magic pill 'Chantix' which is Pfizer manufactured and approved by FDA on May 11,2006.For more sophisticated information about the side-effects of smoking and the treatment of it,Please logon to Chantix Online.

Puffing away at the cigarette is always a pleasurable experience for all smoking addicts and the feeling of well-being provided by nicotine makes the users of cigarettes and other tobacco containing substances consistently addicted to the habit of smoking. But as the ill-effects of smoking show off slowly and gradually and a smoker becomes a victim to atherosclerosis, Buerger's Disease and a whole range of other smoking induced ailments, he fins no way out other than opting for the antismoking medicine Chantix . For more details on chantix, log in to the site http://www.chantixhome.com/ .