For Your Consolation: Catherine O'Hara

Catherine O’Hara could’ve won an Oscar this year, and it’s not her fault she won’t. More on that (and For Your Consideration) later.

But first: Catherine. IMDb says she "has an almost religious cult following around the world.” And I can believe it. This video is Exhibit A.

Why do we love her? Maybe it’s because she is the only viable heir to Gilda Radner. O’Hara is a ballsy performer, a reckless impressionist, a character actor without vanity or delusions of grandeur. Maybe it’s her red hair. Maybe it’s her voice, which (like Radner’s) was always a little flat or sharp. It’s a tomboy’s voice, a voice slightly hoarse from laughing. She is a comedian, but she’s not a personality like DeGeneres, Griffin or Poundstone. O’Hara is egoless and -- despite the distinctions of her physicality and her talent -- almost anonymous at times, which is probably why she has never been a movie star, and why she only briefly flirted with TV stardom (as a mainstay on SNL rival SCTV) and why she has become a beloved cult figure nonetheless. I hate the word “cult,” because it belies the sincerity of her fans’ admiration.

Beetlejuice was my first encounter with O’Hara. She plays Delia (left), the flakey matriarch of a seriously bizarre family in a bizarrer house. Delia is a fatalist, a bad mother and a worse sculptor. Could any other actor have pulled off a character that is, at one point, both possessed and lipsynching to Harry Belafonte? She's being manipulated by ghosts, but she's more horrified that she's actually enjoying it.

A couple years later, in 1990, she hitched a ride to a box office rocket ship: Home Alone. Her straightforward performance as Kate McCallister anchored a galley of absurdity. She was the heart and soul of the franchise -- free of bombast, and heart-tugging especially in the sequel. Home Alone is still the top-grossing comedy of all time, I believe. Let's hope she's still getting some ancillary checks in the mail.

O'Hara's one shot at comedic stardom was 1992's There Goes the Neighborhood, which was the last gasp of those suburbanites-are-wacky comedies (think The 'burbs and The Money Pit). O'Hara got billing beside Jeff Daniels, whom she matches blow for blow. But O’Hara was no Meg Ryan, and that’s both a compliment and a guarantee that she would never be an A-lister.

But she continued her streak through the mainstream by reuniting with her Beetlejuice director, Tim Burton, to voice Sally in A Nightmare Before Christmas in 1994. What an unconventional and thoroughly delightful pairing: O'Hara and Chris Sarandon as animated netherworld lovers.

O'Hara succeeded subtlely in small dramas (sporting a decent Irish accent in Summer Fling, losing all hint of showmanship as a guest star on The Outer Limits). She has been the lone spots of intrigue in middling movies: The hysterical and paranoid Gail in Scorsese’s After Hours, the Southern-fried gossip in the awful Heartburn. She showcases her penchant for benign wickedness as the clever wife of an adultering Joe Pesci in Betsy’s Wedding. All of this was post SCTV: 1985 to 1994. It was a decent run. She was a luminary in some wan material.

Then, glory in 1996: Christopher Guest gives her a platform on which to perfectly blend her TV sketch roots with her varied film work. Her performance as Sheila in Waiting for Guffman is like w 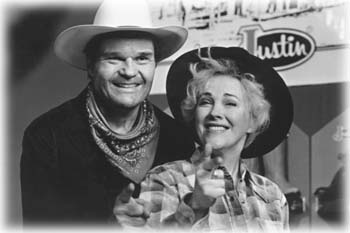 atching Christ discover he's God made man. Witness the chop suey restaurant scene, in which Sheila is drunk. Lots of actors lose all believability when they’re asked to play drunk. O’Hara knows exactly what to do. In order to act drunk, one must make every effort to appear not drunk. On the Guffman DVD, go to the deleted scene in which Fred Willard makes her reenact famous baseball plays. O’Hara has no lines, but her demeanor, countenance and stance provide the biggest laughs. A lesser performer might’ve tried to play ping-pong with Willard’s antics. She wisely lets herself be steamrolled and steals the scene.

Lighting struck again in 2000 with Best in Show, in which O'Hara plays Cookie Guggelman Fleck, the promiscuous co-shower of a beloved Yorkshire terrier, this time opposite fellow SCTV alum Eugene Levy. I simply offer this clip. By God, you're gonna show Winky.

While A Mighty Wind was a step down for the Guest franchise, O'Hara once again slung some sweet sincerity into the heart of a comedy. As the Mickey half of Mitch & Mickey (left), she can sing, she can act and she can be very funny, sometimes all at once. Here's "When You're Next to Me."

When I heard that she was playing the lead in For Your Consideration, I was giddy. The Hollywood awards season is the perfect topic for Guest & Co., and O'Hara is the perfect choice to play the aging character actor who thinks she's about to have her moment in the sun. I could see it all before me: O'Hara's performance would be Norma Desmond meets Lucille Ball. It would be madcap and tender and real and moving and ruthless and sad -- all the stuff she has prepared for since SCTV. By God, O'Hara would be so good that she'd be nominated for an actual Oscar. Hollywood would watch her, see both the best and the worst in themselves, and laud her for it.

Oh reader. Read no farther. Spoilers ahead. The movie is in limited release today, so I feel comfortable commenting. But if you're a Guest fan who plans to see it regardless, skip this.

For Your Consideration is a wreck. It's amateurish to the point of shoddiness. It lacks cohesion. M

ost of the jokes and gags fall flat. The jokes that are funny are only funny because we know and love the people who are delivering them. This movie is not a satire. It's hyperbole. And it flares up like a firecracker and burns out almost immediately. Guest & Co. are in a downward spiral when they should be at the top of their game. I've seen it twice now. I am not mistaken about this.

The plot is thus: Some blogger on the Internet thinks "Home for Purim," a sloppy melodrama currently in production, is "Oscar-worthy." The unfounded buzz builds around three of the actors, played by O'Hara, Harry Shearer and Parker Posey. Everyone gets caught up in it -- the agents, the media, the actors themselves. It's a frenzy. Meanwhile, the studio suits are trying to tone down the film's "Jewishness" and the director (played by Guest) is throwing out the script. It all comes to a head when the nominations are announced.

And then the movie ends. I expected the last act to be at the actual awards ceremony. Can you imagine the ripe material Guest & Co. could draw from a fake Oscars? But we are denied any kind of comedic payoff. What Guest leaves us with is a blunt, unfriendly statement about delusion. It's an inedible conclusion.

But what I'm most sad about is O'Hara, who is confined instead of freed by the material. The movie feels like it was scripted. Improv seems minimal. The whole thing feels orchestrated. Doctored. Forced. O'Hara's character becomes a vehicle for Guest's statement, rather than a person of her own. She has some great moments, but they are fleeting and do not add up to a whole. For Your Consideration is a movie that could've used less script and more direction. Or maybe vice versa. I don't know. All I know is I wanted to reach through the screen and tell O'Hara that this isn't working. Let's start over. Let's plan this out a little more. Let's take this story to the actual Oscars, where the real comedy happens.

Unfortunately, the story doesn't go there, and now O'Hara and the movie won't be going there.

SCTV clips: O'Hara as Dusty Towne, Sister Mary Innocent, Linda Blair and Liz Taylor, Morgan Fairchild and Angie Dickinson. And the best clip from For Your Consideration.
Posted by J.J. at 12:00

Thanks for the warning about For Your Consideration ... I'm probably gonna have to brave it anyway out of love for Mr. Guest, but the negative word is definitely starting to pile up!

That video on the Catherine O'Hra freaks is hilarious beyond compare, not to mention done rather well.

If O'Hara picks up one or two critics awards and a Globe nomination, she'll be up for the Oscar. So I guess the tragedy isn't that she will not be nominated, it's that she could be nominated for an ill-conceived, half-baked performance when she was capable of a superior one. Whatever.

Well, I didn't think the movie was that bad. I'd even go to say that it's not in the outer realm of possibility that O'Hara could get an Oscar nomination, but I'd say chances are slim. I actually was quite surprised at how devastating the ending was, and it proves some of her acting chops, some range, all that jazz.

In related FYC news, Jane Lynch is a comedic genius. I've always liked her, but my respect for her shot through the roof with this one.... she steals every frame she's in without ever having to utter a line. Her acting chops are on fire.... perfectly mannered and so skewering, I haven't laughed so much at anything in the movies in awhile. That was probably worth the price of admission alone.

O'Hara does have a chance, a rather good chance -- since we're talking about her chances at all. And it's an energetic performance. The problem is that it's not what it could've been (and neither is the movie). That final shot of her is so awkward and bitter and unfunny.

Schwarzbaum gave it an "A-" in Entertainment Weekly. She must be crazy. FYC was mean-spirited without being funny. They should've stuck to the documentary style. As one reviewer put it, Guest & Co. are shooting fish in a barrel with a bazooka and congratulating themselves on their marksmanship.

As an aside, I interviewed Lynch on the phone last Tuesday. I did a piece on her and Willard stealing the show, and how the movie is more on target when it's skewering television (not movie) personalities. I'll send you the link (although it looks terrible in the online format).

Agreed... the more I hear, the more negativity seems to be emerging.