This is a love letter to Tom Cruise

And you recoil. A love letter to Tom Cruise? The guy who attacks the postpartum depressed? The guy who allegedly employed a religion to cure his supposed homosexuality? The guy who used Katie Holmes to harvest the reincarnation of L. Ron Hubbard only two days ago, in conjunction with the imminent release of his latest summer blockbuster?

We here at As Little as Possible (and by “we” I mean me and my intern, and by "intern" I mean my fridge) do not wallow in the excruciating minutiae of rank celebrity, unless it serves a sensible and greater purpose and does not engage in feckless fawning or rancor. That is why you don’t see hotel heiresses here. That stuff is for Defamer, which does an excellent job both covering and lambasting the third-rate dog and pony show Hollywood has become. In fact, Defamer should be granted exclusive rights to this particular arena, because too many people are trying to wrest the spotlight from the spotlit.

The non-stop Cruise-a-thon has been humming along for one year, since this (although this is funny as hell). I don’t dispute that Hollywood engineers “stunts” to trumpet releases. It’s the nature of the biz, and we, as consumers, have the ability to block the media onslaught. We can simply turn off Access Hollywood or close US Weekly.

That said, I feel the need to offer some fairness and balance, because even some of the most culture-savvy and levelheaded folks I know are letting themselves be marginalized by Cruise’s theatrics.

He hasn’t hurt anyone with his personal life—don’t tell me without proof that his tirade against prescription drugs has injured anyone—and his personal life hasn’t hurt the quality of his movies. That’s all that should matter. He can be as “crazy” as he wants, as long as it stays in those parameters. The moment his personal life taints his movies, I’ll be the first to pin him to the wall. After all, he wasn’t the one who made Battlefield Earth.

Point of order: Cruise would not make my list of modern cinema’s great actors. His range doesn’t come close to that of, say, Geoffrey Rush or Russell Crowe. We all know that. But he is a good actor, an indelible movie presence, and he has the clout to finance great movies. Imagine if he turned all his powers to nurturing independent films (like when he produced Shattered Glass and Narc).

So let us not ask “Is this it, then, for Tom? Is his unprecedented reign as the movie star over?” Let us, instead, reflect on four movies. I hate two of them. I love the other two. But I think Cruise is perfect in each, and each perfect for Cruise.

1988. Rain Man. I hate this movie. But Cruise comes so close to redeeming it. Dustin Hoffman won an Oscar for playing a walking set of tics without a personality. Cruise should’ve at least been nominated—there is not a more truly

supportive performance in the annals of moviedom.

1998. Magnolia. I also hate this movie. But Cruise gets to exhibit a nasty, un-Disneyish side. He sinks his teeth into an operatic part, and never do we get the sense that he is being self-conscious or non-commital. He is the only reason to see this massive miscalculation (even poor Julianne is saddled with a preposterous role).

1999. Eyes Wide Shut. The flip side. Cruise’s role as Dr. Bill is all subtext. There is no showboating, which means there’s an even larger margin for error. It’s the trickiest role of his career. Cruise no doubt owes much to his director, but not even Kubrick the Kontroller can totally manipulate an actor's performance. The subtlety and control are Cruise's, not Kubrick's. 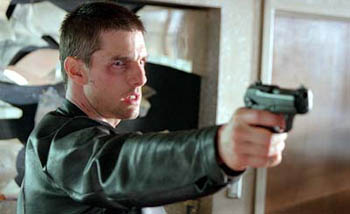 Scandalously under-credited and overlooked. The world’s heaviest heavies—Cruise and Spielberg—combined their exhaustive talents and turned out a gripping, glorious sci-fi murder mystery. Technically superior and narratively exquisite, it ennobles Cruise's “screen presence,” his ability to carry blockbusters like Top Gun, The Firm, The Last Samurai, War of the Worlds and the Mission: Impossibles.

To make a long story short (too late), Cruise has been at the top of his game for 23 years. That’s an astonishing run. Has anyone matched it? I don’t think so. I eagerly await M:I 3 because I know—through 23 years of evidence, Cocktail aside—that it will be, at the very least, worth the price of admission (which we can't say for 95 percent of the dreck currently in theaters).

I wasn't a big fan of Tom Cruise way before he went looney in the spotlight and started jumping on couches and things. Not a fan of his movies, either. I'm glad I'm not alone about hating Magnolia.... you gotta be careful voicing your dislike of that film in a crowded room. But how about the greasy diarrhea mark that is Vanilla Sky? That movie was so so so bad on so so so many levels, the largest of them the fact that Tom Cruise was the star.

But.... his "movie star" presence can sometimes hit the perfect mark, and then the movie wouldn't be the same without him. Hence I have a great deal of affection for Mission: Impossible (the first installment.... you know, with the likes of Brian DePalma behind the camera, and Jon Voight and Vanessa Redgrave as spectrum-spanning bad guys) ; that was blockbuster done right. Too bad they couldn't get it right again, even with Anthony Hopkins and Beloved to try and help it out. I don't exactly have high hopes for M:I-3 either (Ving Rhames wore out his welcome in M:I-2, and they can dangle PSH and Felicity in the trailers all they want.... it all looks forced); my loyalties remain with the first.

As for Vanilla Sky, I fell asleep during it. But after viewing it a second time, I came to the conclusion that it's not as dreadful as people say. Cruise obviously wanted to challenge his own playboy image.

I actually don't know anyone who's a Tom Cruise fan, so I readily admit this post is directed to no one but myself. People think Cruise is a sham, that his entire personality and joie de vivre is a deranged act, but I think he's just an overly genuine guy who's in love with being alive and renowned. Call me crazy. Call him crazy. He likes making movies, and I like watching them.

I feel you. I've always felt that people sort of fail to notice that he's actually a good actor with good range who works with fabulous directors, and instead they focus on his offs-screen antics. It's the nature of the beast, I suppose, but my view of his "crazyness" is that it must be pretty damn hard to be the most famous actor in the world for several decades and *not* go a little looney-tunes. Just think about it. Celebrities like him have NO LIVES. They are pursued EVERYWHER. At some point, they must just want to say fuck it and do whatever the hell they want.

And look at his films, like what you mentioned, "Interview with the Vampire" (campy as hell, but he nailed that character), and "Born on the Fourth of July." He's putting some interesting stuff into the world. He makes great choices as a producer. The past ten movies he's starred in have ALL opened at #1. I probably won't see MI:3- spy capers have never been my cup of tea- but I'm not about to write the guy off. See my recent LJ post for my thoughts on TC & Scientology.

Splendid. It's a testament to his filmography that I didn't have the space to even mention Vampire and Fourth of July -- too many worthy choices. And no doubt there has been some wear and tear on Cruise's psyche, as you say, from living his life inside out. But at least he hasn't gone as bonkers as Jacko, or Brando.

it's a very bad idea to suggest that people cannot harm other people if there is no tangible traceable proof. History is filled with hateful public speech: Racism, homophobia, demonizations or this type or that,

and it's also silly to suggest that ignorance filled religiously fueled arguments don't harm people. There is rarely a way to connect the dots between one public person's words to another private person's actions but that doesn't mean that public "speaking to millions" ignorance isn't contagious or harmful.

that said i semi agree with the rest of this only less emphatically: I think he's awful (Vanilla Sky, Cocktail, Last Samurai ) just as often as he's great (Magnolia, Born on the 4th of July, Jerry Maguire) but there is no question whatsoever about the potency of his screen presence.

N.R. -- See, I love The Last Samurai. But that may be mostly because of Hans Zimmer's work, not Cruise's.

As far as your point about hateful/religious/ignorant public speech: I am in agreement, and did not mean to suggest that site-specific evidence is needed in all cases. But, to my knowledge, Cruise's sermons have not been hateful or bigoted. Yes, they were insensitive and glib and ignorant -- "You're glib, Tom, glib!" -- but they have been coarsely exaggerated by the media. He thinks psychiatric drugs are wrong because of his beliefs. Fine. But I don't think there's a person on the planet who would take seriously that comparatively small sticking point. Maybe I'm giving the public too much credit, and patients across the country are in revolt when pill time comes around.

But the media and the public should be paying more attention to genuine hateful public speech issued by other movie legends, namely Ernest Borgnine and Tony Curtis, who have declared they did not and will not see Brokeback Mountain because it involves two men who love and have sex with each other.

Cruise's harmless drug spiel and other idiosyncrasies have gotten a thousand times more play and traction than the blind and beastly intolerance of these two bozos, and that's only because Borgnine and Curtis aren't opening movies at No. 1 on a yearly basis.