Hi, I'm alive. And as such, I will make my usual outrageous Oscar predictions. I have a hunch that Benjamin Button is facing a major turnabout and might see snubs in high places, but I'm not confident enough to remove it from my best pic shortlist. Here are the highlights of my predix:

1. The Dark Knight and The Curious Case of Benjamin Button will both get 11 nominations -- including picture, director, and adapted screenplay -- although Brad Pitt will be snubbed.

2. Two of the director slots will not match up with the best picture slots. Darren Aronofsky and Gus Van Sant will be cited, while The Wrestler and Milk will be bested for best pic slots by Wall*E and Frost/Nixon.

5. Slumdog Millionaire will have 10 nominations, keeping itself in underdog status (technically). Noms will include original song for "Jai Ho."

6. Only 21 films will fill 19 categories, with Slumdog, Dark Knight and Benjamin Button hogging almost all of the technical categories. Few surprises will sneak in; the surprises will come in the shuffling of films already in the mix. The only "surprise" I can foresee is a nomination for the screenplay of The Visitor and "Rock Me Sexy Jesus" from Hamlet 2 for original song.

7. Clint Eastwood, in addition to best actor, will be nominated twice more: as composer of the original score for Changeling and as co-writer for Gran Torino's titular song. 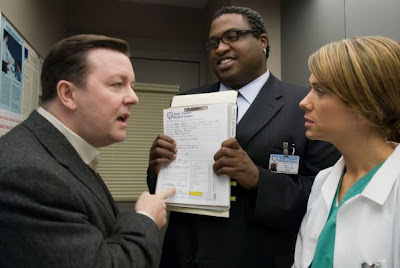 In Ghost Town, Kristen Wiig doesn't do anything different from her usual Saturday Night Live schtick (the same schtick she schticked in Knocked Up). The schtick is still f*cking funny and it works in this movie, which is a charming soft-shoe into the afterlife. Wiig plays a surgeon who prepares and administers a colonoscopy to Ricky Gervais. Talk about a great comic setup.

She has two scenes -- before and after anesthesia -- and in both she exploits her masterful deadpan and clipped cadence. She's delightfully flippant in both, and adds a bit of verbal slapstick that mixes nicely with Gervais' straight man routine. Actually, when the two are sparring over whether or not Gervais died briefly during the procedure, you can't really tell who is the straight man:

What a curious repeat pair of line readings. What a curious comic actor. If this is the one note Wiig has in her repertoire, then at least she can take heart that it's a good one. There are those who might say her appearance in Ghost Town is too brief to elevate it from cameo to supporting, but I say who cares. Supporting is supporting, not "second lead." It's the small gems, the quicksilver laughs. Wiig delivers them here.

This post is part of StinkyLulu's Supporting Actress Blogathon. What actor would you nominate in the category?
Posted by J.J. at 21:45 13 comments:

American Teen is billed as a documentary -- about what it means to be a high schooler in the United States in the 21st century -- and that's what it is, I suppose. It is a document. I saw it several times over the summer (for professional reasons). The first time I thought it was cute. The second time I thought it was cheap. And the third time I thought the film's glossy packaging, re-staged moments, and adherence to the narrative conventions of fiction made it a document about a generation raised in front of screens. This movie is not about real-life high school as much as it is about a generation who has been raised by television, and movies, and cell phones, and technologies that keep us occupied in a fantasy land instead of engaging us in the real world. This generation (my generation) knows how to present itself on camera, and its members know what's expected of them after "action." They know how their peers act on MTV and Bravo reality shows. And with American Teen, they had a director whose vision seemed about as real as The Real World.

manufactured. But never once in American Teen does she forget the camera is watching her. By virtue of her natural traits and her screen savvy, Hannah is the heart and soul of the movie: pretty, charismatic, hip, nerdy in an endearing way, kind of a real-life Juno. American Teen director Nanette Burstein wisely focuses on Hannah, who has the necessary charisma and self-awareness to "carry a movie." And the two collaborate to create one of the more endearing characters onscreen in 2008.

Hannah Bailey laughs, cries, drinks, rocks out on the guitar, descends into depression, yearns to get out of her podunk town, and finally hops in a car and heads West. And we do all these things with her. All of these disparate events are packaged like a coming-of-age movie, with a beginning, middle and end. Hannah must perform when monologuing to the camera, when going through the natural beats of her story, when re-living the beats of her story that the camera missed the first time around. She knows the camera is there, and she knows what lines and actions will make a good scene (she gets more laughs and votes of sympathy than any of the other "characters"). Maybe the Hannah Bailey onscreen is the same as Hannah Bailey in real life. But when you know you're on camera, and you have a director who reinforces this self-awareness, and you have been raised in a media-savvy world...

Well, when the camera starts rolling, you become a character and you give a performance. And Hannah Bailey's was a memorable one, for more reasons than one.

This post is part of StinkyLulu's Supporting Actress Blogathon. What actor would you nominate in the category?
Posted by J.J. at 12:51 13 comments: