More than a thumb, now a star

As long as we're on the topic, Roger Ebert is getting his own star on the Hollywood Walk of Fame June 23. Silly, but deserved. He was the first film critic to win a Pulitzer for criticism (now the committee hands them out like candy to film critics -- Stephen Hunter at the Post, Joe Morgenstern at the WSJ). But now Ebert will be the first and only critic on the walk. Staying one step ahead, I see. As soon as Hunter and Morgenstern get their stars, they'll probably send Ebert to the moon. Can't you see the headlines? CRITIC WALKS ON MOON.

All seriousness aside, the man has cultivated a media image that distracts from his true merits. Most people know Ebert as the dyspeptic man on television, waving his thumb this way and that. Fat Ebert. Movie(critic)star Ebert. His opinions have been distilled to a "Two thumbs up!" (I guess he's not doing much to disspell the image in the above photo, at the Beverly Hills premiere of 'The Terminal'). Unfortunate, I say, because his criticism and essays are invaluable. As purely a journalist covering film, Ebert is unmatched. And he's also not fat anymore. He's rather fit, post-cancer and -surgery.

He is not a blatant polemic like Pauline Kael was. He's not overly academic like James Agee was. He's not glib like Mike Clark is forced to be at USA Today. He doesn't intend to be as much a media whore as Leonard Maltin. He writes with passion and wit and clarity. No one else comes close to the level of honesty in his artistry. And that is what he's made of criticism: an art.

He's published many books; his "Great Movies" series is a fine compilation of reflections and his "Book of Film" is a priceless grouping of essays by every manner of person on every manner of film. With his annual Overlooked Film Festival, he uses his clout to get great underdogs noticed.

At Telluride last September, I engaged the man in conversation for a half-mile walk between theaters. He was not the least bit interested in me, or what I had to say, but who cares. I'll only be insulted when he stops writing.

Here are links to three of my favorite reviews/essays by Ebert:

review of My Life without Me

review of Seed of Chucky

The two people in the middle, Paula Abdul and Ryan Seacrest, will both have stars on the Hollywood Walk of Fame next week -- she for her recording career, he for his radio carrer. No doubt the two ad-wizards on the end will have theirs by the end of the "American Idol" season.

Seacrest is getting his in a ceremony on Wednesday, which is (holy smokes!) a ratings-race day for the big networks. I know it's a Walk of FAME and not a Walk of TALENT, but does that still mean these stars should be bought and sold to promote the latest cash cow? And some of those absentees -- Clint, Fonda, Redford -- are seriously famous, talent aside. 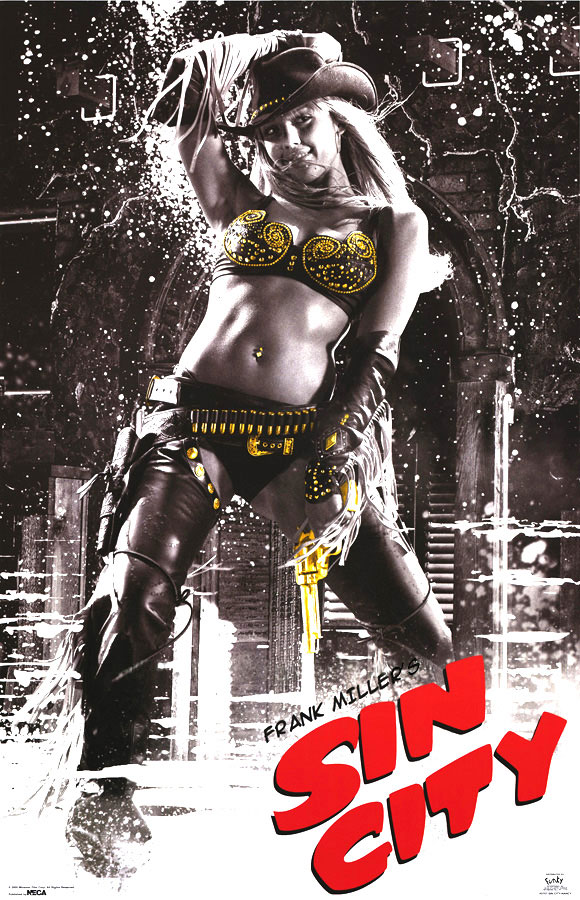 Would you say I was lame if I said I fell asleep for some of Sin City?

I spent the better part of the day tooling around the city in a Hertz rental car with Dan Aykroyd.
Posted by J.J. at 21:37 2 comments:

This is the French poster for 'Melinda & Melinda,' and I like it better than the American one because it gets at the heart of the movie without you knowing it. Yes, film (like life) can be comedy or tragedy, but there's still someone behind it all, pulling the strings: the dutiful, faceless director, who decides what we see and how we see it. In Woody's mind, 'Melinda & Melinda' might be a Nietzschian examination of the purpose of man's purposelessness, but it functions on a completely cinematic level too. It is an exercise in narrative maneuvers -- how characters and audiences are manipulated -- and how at any moment things may stop suddenly. Woody illustrates this in the last shot of the film, when Wallace Shawn snaps his fingers and we are left suddenly to confront the world we'd paid $10 to escape. In his review, Roger Ebert takes this idea further and concludes with, "At the end of 'Melinda and Melinda,' we realize that neither Melinda nor Melinda is real, but Woody Allen certainly is."
Posted by J.J. at 00:36 No comments: