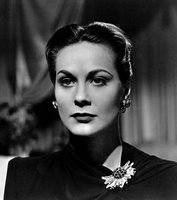 Yesterday, my laptop went into screensaver mode, which features a parade of photographs both personal and movie-oriented. I watched for a little bit, as I often do, as the screensaver ticked through snapshots of both my young life and the movie moments that have inspired it. I remember trying to lock eyes with Italian siren Alida Valli when her studio photo came up, but it's impossible. She is looking just past the camera, like she knows you're there but has weightier things on her mind.

I just saw, moments ago, that Valli died yesterday in Rome at 84. I have seen her in only one movie, 1949's The Third Man. It is a testament to both the film and to her that she has remained (and will remain) etched into my consciousness as Anna Schmidt, the woman who should be the pivotal point in a post-war love triangle in Vienna but manages to operate mysteriously outside of it. Pulp author Holly Martins (Joseph Cotten) travels to Vienna--then splintered into occupied quadrants--to meet an old friend, Harry Lime (Orson Welles). He is met instead with news of Lime's death, and with Lime's love interest, Anna.

From here, we might guess that Anna will fall in love with Martins as he pursues the truth about Lime's death, and that Martins will whisk her to America after the mystery is 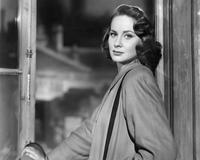 solved. What happens instead is one of cinema's great stories, screenplayed elegantly by Graham Greene (whose autobiography I'm reading now) and directed without compromise by the British director Carol Reed. Anna is not some pushover broad. She is a woman haunted by war, who operates with dignity in the face of rampant government corruption, and the corruption of our dear protagonist, Martins. In this respect, Anna seems to exist above and apart from the film, as if mere celluloid is the only thing keeping her from walking off the screen and away from all this human weakness and madness. She is not cowed by crooked authorities, not seduced by the promise of new romance, not consumed with trying to find truth in a thicket of lies. She is simply in love with a dead man, regardless of whether he was good man. She has her own set of rules. She plays by them and doesn't cheat.

It's a dangerous, mysterious, seemingly static part, but Valli--with her austere, porcelaneous looks (some say Garbo by way of Bergman)--made it into an entrancing study of manicured bitterness. Anna has secrets. A lesser screenplay might've made her reveal them, or at least allowed Valli a three-hanky scene in which she confesses, in Martins' arms, her deep regret and uncertainty.

Instead, we are given the greatest final shot in movies. In a single extended take, without uttering a word or making a commotion, Valli conveys The Third Man's shattering essence. Without spoiling it, let me put it this way: She simply walks past Martins, past the camera, and past us. I will never forget that feeling.
Posted by J.J. at 16:54

i merely skimmed your appreciation. OK, let's be real. I didn't read past the part where you talked about moments of your young life ticking away on your screensaver. I'd better be in at least a dozen of those pictures or "I'll bash your head in." And so help me if you don't recognize that blatent reference, I'll stick a frying pan down your pants.

Either the circus is in town, or it isn't.