Without László Kovács, we would not have...

...Jack Nicholson, as we knew him at the start of his brilliant career. Kovács, a Hungarian-born cinematographer, died over the weekend in Beverly Hills at age 74. He photographed Nicholson in seven movies between 1967 and 1972: Richard Rush's drug-infused Psych-Out, the Bogdanovich thriller Targets, Bob Rafelson's moody twofer Five Easy Pieces (above right) and The King of Marvin Gardens, and the motorcycle trilogy Hells Angels on Wheels (also directed by Rush), Easy Rider ("You know, this used to be a helluva good country") and The Rebel Rousers (Tagline: "Their creed: 'If it feels good, do it!').

I love this period of Nicholson's career. It's the Drifter Period, which hit its stride with Easy Rider in '69 and culminated with Antonioni's The Passenger in '75 (the year in which Nicholson instead reaped kudos for One Flew over the Cuckoo's Nest). I don't know if he and Kovacs were good friends, or whether they had similar temperaments and therefore made similar career choices, but they both defined each other during this period. Nicholson's acting was reserved and passive. He was, in essence, more reactor than actor. What I remember most about Five Easy Pieces and Marvin Gardens is that Kovács' camera struck the same tone. It was not participatory. It was observational. Rather than see "with" Nicholson, it simple saw him. Kovács' camera did not fawn over this blooming movie star; it kept its distance and allowed him room to grow. I have no idea if the two were active collaborators, but it was a nice marriage. I wish I could be more articulate, but I'd have to give the films another viewing. What I remember from these two movies in particular is that both Nicholson and the camera seemed to be entities in search of something. They didn't find what they were looking for, but they did find each other. And it worked.

But they never again worked together after 1972. Both men's careers would evolve toward populism. Nicholson struck critical gold with Chinatown and Cuckoo's Nest, then entered the Kitschy Period with The Shining, Terms of Endearment, The Witches of Eastwick, Batman, A Few Good Men and so on. Kovács did the same. Though there are many good titles on their filmographies, it does feel a bit like the wild boys tamed themselves over the years. Nevertheless, to send him off, here are some screen shots from Kovács' non-Nicholson work (click on the photos for IMDb info): 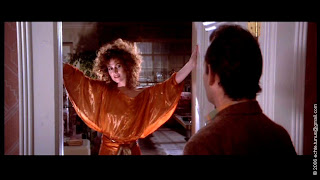 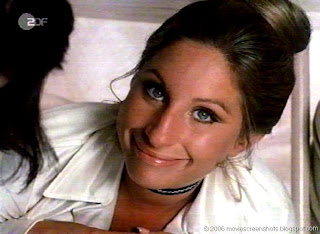 She's not my girlfriend. I find her interesting because she's a client and because she sleeps above her covers...FOUR FEET ABOVE THE COVERS.

Yes. And regarding Ghostbusters, it has one of my favorite end credits sequences ever, and I think that's Kovacs' doing. The whole thing is shot like the live-news coverage of an event. Very free and shaky and kind of glorious. Love it.

I hate how Ghostbusters throws Winston Zeddemore after Louis Tully and Janine Melnitz in the end credits. Well, I kind of understand since Winston only shows up in the second half of the film, but to repeat the mistake in Ghostbusters II is a little strange. I know he's not an A-list name (like Annie Potts!), but, man, he was a Ghostbuster. Show him some respect.

I have just spent the last 7 years researching and writing a trilogy of novels on the general subject of the Hells Angels. "The Angels' will be published in November in Canada and beyond shortly thereafter. Here is the question: in researching titles and so on, I could not find even one other novel on the same subject. Which I found odd. If you know of one, please tell me. Non-fiction books I have a long list of - it's fiction that's the tough nut.

As for Jack, in 5 Easy Pieces, he made it ok for an actor to be an asshole. The scene with the sandwich where he humiliates the redneck waitress was a revelation. I was a young (successful) actor at the time and that scene was the beginning of a sea change for me. And you have a great site. Well written and edited....Thanks.

Rusty: The sidelining of Ernie Hudson has always been awkward for me. Even during the movie you can tell he feels like some sort of stowaway. Eddie Murphy would've seriously changed the chemistry -- I wonder if that would've been a good thing.

Gary: I have no knowledge of the Hells Angels, fictionally or otherwise, but your project sounds neat. And you're right about the asshole aspect. Brando introduced the tough guy; Jack introduced the asshole. Both were revelations. Jack turned the leading man archetype inside out.

Untimely, as usual, but does that stop me?
Heck no!
NPR had a remembrance of Kovacs by Peter Bogdanovich.
When Bogdanovich was making his first feature (produced by Roger Corman) TARGETS in '68, he got paired up with this Hungarian cinematographer. Although his first name was Laszlo, he was going by Leslie Kovacks on his previous credits.
Bogdanovich asked him how come?
Kovacs didn't think the films he had worked were good enough to use his real name.
After they shot TARGETS, Bogdanovich asked him what name he was going to use on the credits, and he went with Laszlo Kovacs.
They worked together on WHAT'S UP, DOC?, PAPER MOON, AT LONG LAST LOVE, NICKELODEON (which I actually saw when it first came out. I paid a nickel to see it! A weird opening night (I think)promotion) and MASK.
According to IMDb, Oscar winning cinematographer Vilmos Zsigmond was a fellow Hungarian student who fled to the US in '56.
Our double fortune.