In the key of Kahn 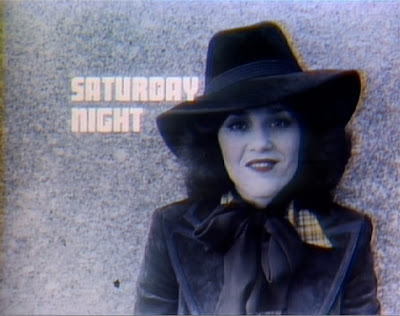 Madeline Kahn was a kook. Every choice she made onscreen was slightly off-key. Her career was a string of strange and rich harmonic notes in chords that straddled the major-minor line (most dear to me, and many others, is Clue's Mrs. White, a performance both sharp and flat in equal turns, resulting in the most eccentric blend of comedy and severity). But I want to briefly consider two grace notes in her career, i.e. two short musical performances she gave while hosting Saturday Night Live.

She sang Kurt Weill's "Lost in the Stars" at the tail end of a 1976 episode in the first season of SNL. She crooned simply, alone on a stool on a dark stage. This was back when SNL was more variety show than sketch dumpster, and there was room for a host to try unique things. Like singing an old tune from a songbook not necessarily tailored for a primetime weekend audience.

How pretty and sad is this? Sure, her operatic training makes the delivery a bit stiff, but there's something about that voice, those eyes, and the narrowing of the light on her face as the camera backs away at the end. It's slightly off and right on. Most importantly, it's interesting. Can you imagine SNL doing this today? And this was the final bit on this episode! What a way to end an hour of comedy. Next grace note is from the third season of SNL in 1977. Kahn pops up on location in Manhattan, singing "Autumn in New York" while trying to find the right key. It's such a weird conceit -- hey, let's have Madeline putz around New York wah-wah-wah'ing -- but oddly sweet. Like her.

She hosted one more time, in 1995, and reportedly sang "Ain't Got No Home" during her monologue. That season of SNL is not available on DVD and the clip is not online. But I can imagine it might've seemed a tad out of place on the SNL of the '90s, and that's probably what made it entertaining and memorable. This post is part of StinkyLulu's Madeline Kahn Appreciation Day.

7. Liza Minnelli, the glutton for adoration 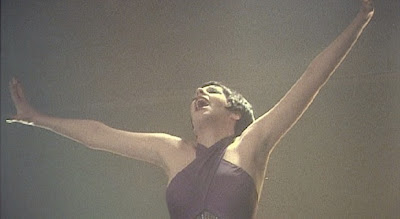 There is an entertainer gene. We know this because Liza Minnelli inherited it. She's purebred from Judy Garland and Vincent Minnelli, whose families go back five generations in the theatre or the circus. Liza came out strange-looking: eyes too big and too far apart, body gangly, nose out of proportion, speaking voice queer, singing voice unconventional. But her essence was undeniable. She was a performer. The entertainer gene exists. She proved it. She proves it. It's not about looks. It's about a specific energy that vibrates from the core of one's being.

The first time she set foot on a Broadway stage, the Tony was hers. It would be the first of five major awards procured by interpreting material by composer-lyricist team John Kander and Fred Ebb. It was 1965. Minnelli was 19. Though her voice "is not yet distinctive," wrote Howard Taubman in The New York Times review of "Flora the Red Menace," "she is going to be a popular singer, all right." Not yet distinctive? Perhaps her vocal thickness was a little too close to her mother's at such a young age.

That would change by 1973. Garland was four years dead and Minnelli finished the Triple Crown in a two-month span. Cabaret was first. "Liza Minnelli plays Sally Bowles so well and fully that it doesn't matter how well she sings and dances, if you see what I mean," wrote Roger Ebert, implying her voice and movement aren't as impressive as her general verve."In several musical numbers ... Liza [first name only, of course] demonstrates unmistakably that she's one of the great musical performers of our time. But the heartlessness and nihilism of the character is still there, all the time, even while we're being supremely entertained."

Attention must be paid to the man who holds sway over the green light. He probably hit his directorial peak in 1982 with Tootsie, but Sydney Pollack's record as a producer has always sparkled, especially during more recent years. Thanks in part to Pollack, we have, in addition to the subject of my last post (HBO's Recount), an invaluable quartet of projects from the last two decades:

Update 27 May 08, 12:28 / I should've concentrated on Pollack's cameo in Death Becomes Her, where he plays an emergency-room doctor who makes the gruesome discovery that Meryl Streep -- who is acting perfectly healthy -- has a broken neck and should probably be dead. He can't even find the heartbeat. It's a wonderful little comic turn, in which Pollack descends into utter shock, trailing breathless "uhs" as he's trying to reconcile diagnoses with facts.

"I tell you what, kids, it's, uh, odd thing here. Your wrist, uh, far as I can tell, is, uh, fractured in three places. Uh, and you've shattered, uh, two vertebrae, though I can't be certain without an X-ray. The bone protrusion through the skin -- that's not a good sign. Your body temperature is below 80, and your, your, your heart's stopped beating."
Posted by J.J. at 23:59 8 comments: 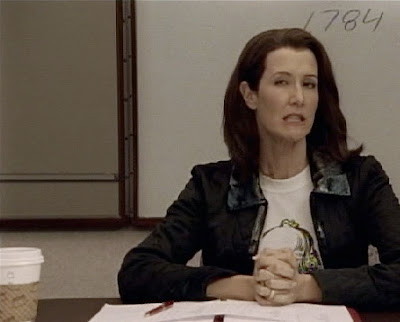 Recount is a gripping, articulate account of something I've never really understood: the 2000 presidential election. It's great entertainment and great reporting. You will come away from it with a deeper understanding of what exactly went wrong, and with more reason to appreciate Laura Dern, who plays Florida secretary of state Katherine Harris, the woman who delivered the election for George W. Bush. Dern's performance is something special: hilarious, deadly serious, a master class in walking the line between going for a laugh and going for the jugular. Harris in real life is a caricature, but Dern resists the temptation to turn that caricature into comic grandstanding. Rather, she plays Harris exactly how she should be: as a socialite who was gifted a tremendously important position in state government and has no business being there. Dern has only a handful of scenes, and each one is special in its own way, but this one is perhaps the most emblematic of her tragicomic turn:

Watch Recount tonight at 9 on HBO and look for re-airings. It's a marvelous, polished, nuanced movie made by the guy who did Meet the Parents (I know, right?).
Posted by J.J. at 11:18 9 comments:

Streep as Shaw as Clinton

The comparisons were made when The Manchurian Candidate remake first came out in the summer of 2004, but Hillary Clinton and fictional entity Sen. Eleanor Shaw have become even more alike as the real-life senator continues her crusade to win the Democratic nomination for president. Shaw and Clinton are ravenously ambitious and both, in their own ways, would do anything to reach their goals. Certainly I don't think Clinton is a villain; I think she is a brilliant woman who made a mistake by marrying Bill and overstaying her welcome in the public eye before shooting for the highest office in the land. I think if she hadn't been first lady or a governor's wife, she'd still be in the same position today: running for president, and probably winning the nomination. But I do sometimes question her humanity — which seems suppressed to make way for political expediency — as well as her ability to work with others. I watch Meryl Streep in The Manchurian Candidate, and the Clintonian vibe can't be ignored.

Am I being unfair? Am I being sexist? Does a woman's power automatically make her a calculating bitch? I don't think so. I look at Eleanor Shaw and Hillary Clinton as human beings who've been so bamboozled by their own sense of worth and power that they are too out of touch with reality to be in a position of authority (this is not gender-based judgment; I also think the same of Dick Cheney). A part of me thinks that, despite the odds against her, Clinton will find a way to get the nomination. I'm sure, right now, she's hosting all kinds of Manchurian meetings, conducting all kinds of Manchurian phone calls, in order to do this. I can see her getting that nomination in Denver by totally perverting the electoral process for a cause she thinks is just: she can do this job better than anyone, and who are voters to get in the way? I can see this happening. I really can. But I don't see it ending with an assassin's bullet which simultaneously takes out her and her husband. I see eight years of improvement in the United States under the second Clinton, but at a price far higher than it's worth.

Note that the remake of The Manchurian Candidate takes place in 2008. Ho ho.

(God I wish I could find a clip of the earlier scene where Streep has to convince party leaders to put her son on the ticket. Marvelously acted, and even more approriate for a Clinton comparison. Can anyone find it online?)
Posted by J.J. at 13:41 7 comments: