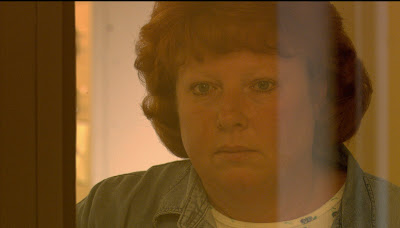 A couple years ago, Steven Soderbergh sauntered into Parkersburg, West Virginia, picked three residents to be his actors and made a moody, fascinating movie that burrows deep into a woman's psyche without the heavy-duty tools of your normal psychological thriller. The woman is played by a middle-aged recently-retired manager of the local KFC. And she's great.

Yes, Bubble is a little experiment (some people -- missing the point of the excercise -- balked at it). Soderbergh worked intently with his three actors, using their real homes as sets, coaching them to deliver what he needed from a scene, then putting a camera on them and filming the improvisation. What resulted from this experiment was a tidy, fascinating story about how three co-workers interact inside and outside of a doll-making factory. The story seems to be spun on the fly, like real life, but there is also a surgical precision to Soderbergh's direction. Never do we sense that this is a runaway train. Soderbergh knew what was happening even as his actors didn't. It's God, and man. And here we have a little Eden of a movie.

Those who enjoy learning about characters through their rich, mundane activities (think Junebug) will love the patience and alertness of Bubble, which captures the small tragedies that ebb and flow through Parkersburg, a depressing place where dreams of escaping are quickly brushed aside. I'm making it sound too romantic, though; Bubble is not about drama. It is about trying to bottle reality and make it behave like fiction on celluloid. It's about stretching the medium -- making it populist and accessible, and fashioning art out of the regular and the unlikely.

I'll admit: I love this movie for how it was put together as much as I do for the end result. The DVD has a making-of featurette and audio commentary with Soderbergh and the three principles. Debbie Doebereiner, perhaps the most unlikely movie star ever, is a joy to watch and listen to. Here is a woman that retired after 25 years behind chicken fryers and stepped right into the magical world of movies. Bubble was a crash course in filmmaking and acting, and her joy and newfound knowledge is evident in the DVD extras. Soderbergh brought her into his world, showed her how things worked, used her naivete and innocence to create a character and produced something very special. Bubble is another significant step toward the utter democratization of filmmaking. It's one-of-a-kind.
Posted by J.J. at 18:09

It was released simultaneously in theaters, on DVD and on television Jan. 27, 2006. I got it right away via Netflix, and it has stuck with me since.