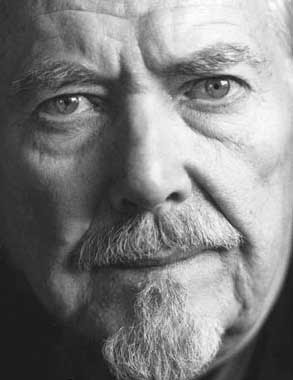 "I've always said that making a film is like making a sand castle at the beach. You invite your friends and you get them down there, and you say you build this beautiful structure, several of you. Then you sit back and watch the tide come in. Have a drink, watch the tide come in, and the ocean just takes it away. And that sand castle remains in your mind. Now I've built about 40 of them, and I never tire of it. No other filmmaker has gotten a better shake than I have. I'm very fortunate in my career. I've never had to direct a film I didn't choose or develop. I love filmmaking. It has given me an entré to the world, and the human condition, and for that I'm forever grateful."

I admit to being nonplussed by Nashville, McCabe & Mrs. Miller, M*A*S*H, Cookie's Fortune and The Long Goodbye -- in this sentiment I am alone in the world of cinephiles, where Altman is worshipped as the greatest of directors. I've never been sold on him. Altman's oeuvre, to me, always seemed like a resounding technical achievement, a mastery of the form but not the emotion behind it. But I loved The Company and The Player for their tenderness and causticity (respectively), and appreciated Short Cuts and Gosford Park for their virtuosity. And, like Sidney Lumet is, Altman was one of the movies' great human beings: generous to other filmmakers, thankful for his luck and status and respectful of both the medium and the power that springs from it.

Does anyone have any favorite moments from Altman films? I like Keith Carradine singing "I'm Easy" in Nashville. I love the final shot of The Company, when we realize that the movie is about love and not dance. And Helen Mirren's modulated confession in Gosford Park -- how still it is compared to the kinetics of the rest of the movie. And I love the sadness that throbs through A Prairie Home Companion, an utterly appropriate swan song. Sure, it was written by Garrison Keillor, but the lines seemed to be spoken directly by Altman.

And as the white-clad moll of Parts Unknown, Virginia Madsen says, "There is no tragedy in the death of an old man. Forgive him his shortcomings, and thank him for all his love and care."

Link buffet & appreciations (as they become available): The eight-minute opening shot of The Player. "We leave his movies knowing that life is many things at once -- at once." Stephen Hunter: "Where others saw theatrical artifice, Robert Altman saw the teeming, throbbing Petri dish called life." JMR.: "It is even arguable that I would not be where I am today without Altman." Looking Closer Journal: Altman, Lynch and a handshake at the 2002 Oscars. Roger Ebert's encounters through the years.
Posted by J.J. at 12:40

I think I'm a Robert Altman fan more intellectually than emotionally.
I like the improv and ensemble aspects of his films. He seems to be attracted to ideas and concepts. I think it's cool that he used Leonard Cohen songs for the soundtrack of McCABE & MRS. MILLER. The overlapping dialogue thing he did is also cool.
But I don't usually think of him when I think of favorite dirctors.
But there are two quotes from him that seem to come up with some regularity, either in thought or in conversation.
One is from the documentary series A DECADE UNDER THE INFLUENCE, and it seems like the perfect companion piece to the book and ITS companion documentary RAGING BULLS, EASY RIDERS. The decade, of course, is the 70s.
In one of the episodes they ask a number of the directors they've been interviewing to name those directors/filmmakers that influenced/inspired them. And a number of names come up and are repeated amongst Lumet, Scorsese, DePalma, Schrader, etc., like: John Ford, Kurosawa, Godard, etc., etc.
And then Robert Altman's face appears and he says how bad movies inspire him, like he can do better than that. And I thought, YES! I understand THAT inspiration as well.
The other quote is from the RAGING BULLS, etc. book. And I forget what the question was, but his answer was basically, I find it upsetting that people will watch my movies only once.
And that really struck me, that assumption is true. And for a filmmaker, particularly a so-called maverick filmmaker, working in a culture where even movies designed to be audience pleasing are probably a bitch to make, to struggle to get something made and then send it out to such a fate WOULD be depressing. That seemed like a real filmmaker's sort of perspective.