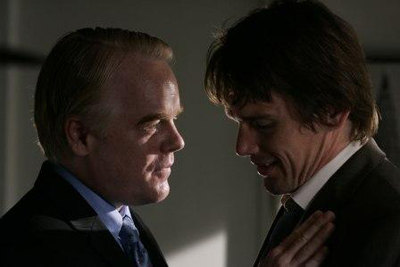 I was very excited for your new movie, Before the Devil Knows You're Dead. "Enthralling," said Edelstein. "Furious and entertaining," said Denby. A "superb crime melodrama," said Ebert. "This is a movie, I promise you, that grabs you and won't let you think of anything else."

I don't really agree with any of these snippets, and it's killing me. It couldn't have been the subject matter; no good movie is ever depressing. Then why did I walk away from it so deflated? I feel like you let me down. I think it's because for the first time, I didn't feel anything for your characters, who, as written by Kelly Masterson, make illogical choices. I never realized how much empathy or sympathy mattered until the credits started to roll and I felt only an absence of feeling. It felt like indifference. Like a vacuum. I hated that feeling.

I'll grant you this: you've coached the men to perform admirably. Hoffman, Hawke and Finney (with whom you worked 33 years ago on Murder on the Orient Express) are dynamos. But your movie doesn't buttress their performances with any real heart or brains. I guess I was longing for something to cling to -- like I did to Paul Newman in The Verdict, Treat Williams in Prince of the City, William Holden in Network, Al Pacino in Serpico or Dog Day Afternoon, Rod Steiger in The Pawnbroker and Henry Fonda in 12 Angry Men.

The critics are praising your "return to form." You're 83 years old, and they're saying you've directed with the vigor of a man a third of your age. And maybe you have. The movie is slick, focused, violent, aloof. But it seems that you've also made some of the fundamental mistakes of a man a third of your age -- sacrificing nuance for bizarre plot economy, for example. My first thought was there is simply too much subtext in Before the Devil Knows You're Dead. But then I started thinking there wasn't any subtext. There was just a vacuum. A radical departure.

I'm sorry, Sidney. I'm so glad people have received your movie with open arms. Lord knows you've needed an unqualified hit. Maybe one day I'll see it again and realize I've missed something. Until then: Stay alive, stay true to yourself, and see you next time.

I left the theatre too feeling deflated.... something wasn't connecting right in this film. The characters were motivated, sure, but in an absent sort of way. I guess I didn't think Albert Finney earned his way into finishing the movie the way he did (which left me not beliving in his character). I liked the music, thank you Carter Burwell. Marisa Tomei is doing well for herself; I didn't mind so much that the majority of her screentime was spent topless.

I'm glad you brought up the Finney issue. It didn't work for me either. It wasn't earned. As I said, the subtext (if there was subtext) was INVISIBLE.

i didn't love it as much as others either but it definitely has its moments. I'm in the B/B- range, mostly for the reasons you state. I just felt like the film didn't really care about the characters despite plentiful opportunities to do so

why pray tell is Marisa Tomei the only character abandoned by the rather flimsy construct of character named titles... as if she has no point of view --not that the sections were actually point of view mind you (hence the "flimsy" comment)

sad. i was rather looking forward to this. i guess i still am, but with deflated gusto.

@ Hurlywood: Recognize that I am in the extreme minority.

@ NR: You're right about the whole construct being flimsy (the structure, the "chapters"), and "abandoned" is a good word for what happened to Tomei and her character. None of it made sense. Like when she leave PSH -- the awkward (but funny) task of trying to get the rolling suitcase out of the living room, and then her asking for cab fare (which seems totally wrong for the character at that point, for whatever reason). Much of the movie did not make sense to me.

J.J.: Glad to see another Brother Shamus thinking like me. I, too, disliked Lumet's movie and wrote a scathing review on my site, and I have long been enthralled with Jonathan Glazer's Birth. Have you seen Glazer's Sony Bravia commercial with the building that expodes into paint colors?

j.j.: To me what makes the whole movie work is that this is movie where the men are staggeringly self-deluded. In Nate's terms this is a "women who lie to themselves" movie for men. There is a telling clue in here that when Hawke goes to see his daughter in King Lear she's playing Edgar (a character who plays a pauper through a good chunk of the play)and ends the play with saying "Speak what we feel, not what we ought to say." The characters felt fleshed out to me operating under this concept. There's a lot of denial and self-delusion going on in this picture. And the scene in the backyard at Finney's house is particularly revealing in this regard.

Regarding the backyard scene: Some might call it subtext, restraint or subtlety; in this instance, I call it incomplete.