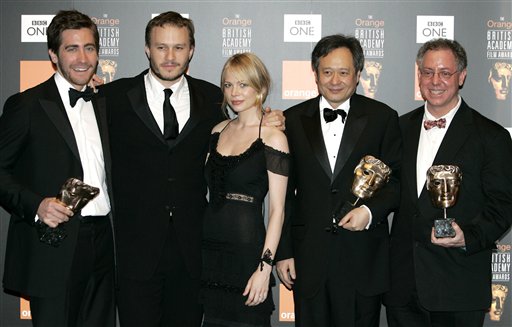 Roger Ebert has invoked Dickens in his latest defense of Crash, which has weathered some fierce criticism to emerge as the frontrunner (maybe) for best picture. You can read my opinion of the movie here, and while I don't think it's the best of the year, I agree with everything Rog says.

The media machinery are spinning and whirring as everyone tries to handicap and re-assess the volatile underdog and favorite statuses of Crash and Brokeback. Nominations? Crash six, Brokeback eight. Pre-Oscar awards? Brokeback has all of them (except for the SAG ensemble award, at left, which ain't as big a deal as people made it; that's Brokeback at the BAFTAs at right). Critical consensus? Crash has a 69 percent approval rating on Metacritic.com, Brokeback has 87. (Incidentally, the poorest ratings for both movies were given by critics at Film Threat, which obviously staffs itself with cranks and grumps.)

So why is Crash a potential saboteur? Because it's had almost nine months to gain momentum, lose momentum, and gain it again. Now it's coasting. Brokeback is in a much more volatile situation. Its rise was meteoric, and therefore there is plenty of room for it to, well, crash in this last week before polls close. But given this, isn't Brokeback the underdog? Oscar season is fraught with such what-have-yous.
Posted by J.J. at 20:36

You agree with everything Roger Ebert writes?

I was actually put off by his appearance on The Daily Show last eve. He's quite a wit, but not on television. And he wasn't up on his current Oscar trivia (Who's singing the Hustle & Flow song again? And in which category is Judi Dench nominated?), and he found a way to insert his undying and awkward criticism of the Teenage Mutant Ninja Turtles, who he thinks are personality-less to a fault. Time to let that one go.